I wish I could say that my shameful neglect of the blog is due to a fabulous vacation or at least lots of trips to the beach, but no luck. Summer’s whipping by so fast it’s leaving third-degree burns, but so far I’ve done nothing and gone nowhere. Having both boys at home, plus Georgia, while continuing to work and carry on is proving to be a tremendous challenge. I spend a lot of time thinking up projects for them — Papier maché masks! “But I don’t like to do the goopy part, Mommy.” Right. Awesome.  — because holy smokes maybe it’s the heat and the constant togetherness but boy howdy are they back to squabbling a gazillion times a day and if I don’t have distractions aplenty blood will flow.

Anyway, an actual honest-to-goodness post is on the docket for soon, but here’s something for the meantime. Because this struck me as an apt example of the effect of line breaks.

Here are two images I found on Facebook. They’re very similar. They’re both funny. But I find the top one helplessly-giggling funny, while the second just makes me smile. The illustrations themselves are a factor, but I think the top one’s line breaks work better, that there’s more air for the joke to breathe, whereas the second runs on in a rush. Though I do like that comma after “Purple.” What do you think? 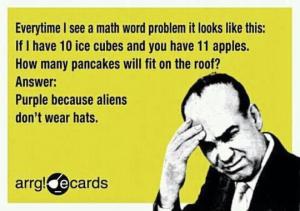 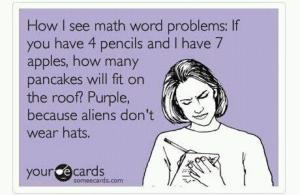 P.S. Kitchen Adventures continue:  I made more strawberry jam — such a good year for strawberries! — chocolate drop cookies, chocolate chip cookies, sweet cinnamon popovers, oatmeal bread, cardamom bread, vanilla banana avocado ice cream, and cinnamon vanilla sunflower butter  [which I adapted from this recipe — couldn’t find sunflower oil at my local store, so I just used vegetable oil, and instead of vanilla beans or paste (because hello! have you seen the price of vanilla beans?!) I used a fair amount of vanilla extract, and then I added a few tablespoons of brown sugar, because it was salty when I was expecting sweet for no good reason, put it in a jar and called it done]. The extreme heat has forced me to take a small break from baking, however. I’m loving food blogs and there’s quite a few that combine poetry & good eats — List post soon! Recommendations welcome.