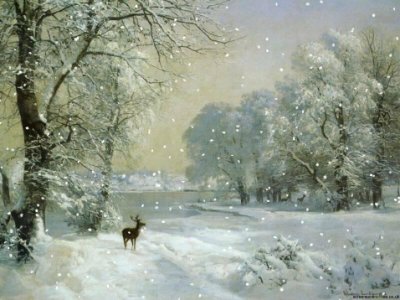 Finally, the day after Christmas, we’re having our first real honest-to-goodness snow storm! There’s nowhere we have to be, plenty of milk, cream, cocoa, tea, and coffee (covering the holy trinity of hot beverages) on hand, and thus we can hunker down and enjoy the view.

With me and the boys down with colds, visiting my mum and her chemo-depressed immune system for Christmas was out of the question. So we had a quieter sort of holiday. Which is the sort of holiday our economic reality is happiest with anyway. Though not the kind of quiet that means silent — my stepsons brought fireworks. Rather a lot, actually. Because nothing says Christmas like explosives.

I’ve packed a bunch of reading into this mini-break — I tend not to use the computer much on weekends if I (and my Duotrope addiction) can help it — while the boys have been deeply attentive to creating art and play-doh wall stucco. Where it used to be I couldn’t read more than one book at a time, I seem to have a compulsion these days to hoard a disparate pile of library books along with my usual supply of literary journals:

I read The Immortal Life of Henrietta Lacks (an interesting follow-up to my reading of The Emperor of All Maladies — the writing’s less elegant, the science less difficult, but the story of the Lacks is utterly heart-rending), the new issue of Poetry Northwest, an urban fantasy novel whose title I won’t mention because I can’t wholeheartedly recommend it but which held my attention, and I’m 440 pages into The Amazing Adventures of Kavalier & Clay, which I really love and I’m trying not to rush through. Without re-reading something from my shelves (which is not out of the question by any means) I’m currently without a volume of prose on poetry, having returned Mentor & Muse to the library — any suggestions, anything new out there I may not have heard about or read already?

Between reading jags I’ve baked blueberry muffins, picked up various wood blocks and legos, and joined my sons with their crayons. Vincent was drawing an elaborate series of small rectangles, something that resembled a spread-out brick wall, and then below them at the bottom of the page, he drew a single small rectangle off by itself, and announced, “This is the lonely one.”

“Because his parents are gone,” Vincent replied mournfully.

“Where are his parents?”

I told Lance how delighted I am that our not-yet 5 yr old’s world includes the idea of a poetry reading.

He raised an eyebrow. “Oh? And how about the fact that he equates poetry readings with loneliness and abandonment?”

My brother took our nephew camping not too far from Shelburne Falls this weekend, to a campground where we spent most of the summers of our childhood, so we went to visit them on Saturday.

Vincent went out on a canoe, splashed around in the lake, toasted marshmallows for s’mores (which he then spit out, deciding he prefers the ingredients individually, leaving me to eat the remaining s’mores alone, alas), watched fireworks, and ran his little legs off.

The boy was literally unspeakably exhausted by the end of the night: when he tried to tell me something as we were driving away, his words came out garbled.  He was asleep before we turned onto the road.

The day was a wind-swept sunny gift.

I reconnected with one of my oldest friends (and Vincent made a new friend in her sweet-hearted daughter).  We had lost touch when our lives flowed down separate streams.  Well, my life flowed.  Hers was always more akin to whitewater rafting.  But now, a confluence, an even keel.  Our re-meeting was perfectly timed.

Lance finagled a few stories from her about our youth — old friends seem to be an endless repository of memories you’ve forgotten, or wished to forget — and it reminded him of his own boyhood summers.  S’mores did not figure.

His family stayed in a cabin off the coast of New Hampshire, or Maine, [Note: in a cabin on an island in a lake in Maine.  “Off the coast? There aren’t any frogs in the ocean, Sweetie.”  Details, details.] and his father hunted frogs with a bb gun.  But the frogs sank.  Ever resourceful, his father then began to shoot the frogs with darts devised of bicycle spokes on a wire, which he pulled in.

Then he sat at the end of the dock and cut the legs from his bucketful of frogs for that night’s dinner.

Little Lance wouldn’t go near them.

He didn’t want to go near that dock, scene of the carnage, ever again either.

I guess it depends on where you stand in life whether you find this story horrifying or hilarious.  It reminds me of “The Triplets of Belleville”, whose plot also features bicycles and frogs.  In a word, hilarious.